Tsipras takes Greece to the edge of the precipice 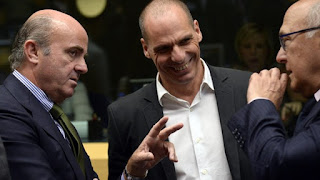 Without friends or finance, Alexis Tsipras, Greece’s prime minister, has had few cards to play in the negotiations with his country’s creditors.

The Greek leader has tried to shame them by appealing to a sense of European solidarity. He has brandished his own electoral mandate to confront Greece’s economic crisis, ignoring the fact that in eurozone politics, there is no reason why a vote minted in Athens should trump one cast in Berlin or Helsinki.

But never far from the top of the pack has been the least honourable card in Mr Tsipras’s hand. This seeks to exploit the discomfort with which sensible Europeans, such as Germany’s chancellor Angela Merkel, contemplate the prospect of Greek exit from the single currency. At the critical moment in the Brussels talks, Mr Tsipras has put his knave of hearts on the table. He is not the first Greek leader to turn to a referendum in despair at the progress of talks over a bailout programme. George Papandreou attempted a similar manoeuvre in 2011 while he was prime minister. The harsh bailout deal survived; Mr Papandreou lost his job.