Tsipras drops envoy to IMF amid pressure from Syriza hardliners 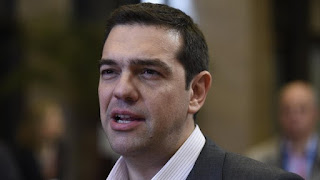 Alexis Tsipras has cancelled the appointment of a controversial Athens economist as the country’s representative to the International Monetary Fund following pressure from hardline MPs in his increasingly restive Syriza party.

The Greek prime minister’s decision on Elena Panaritis, a former Panhellenic Socialist Movement (Pasok ) MP, social entrepreneur and World Bank analyst, signalled a heightening of political tension after Athens missed Sunday’s self-imposed deadline for a bailout agreement amid reports of creditors pushing for cuts in pensions and sharp rises in value-added tax, both rejected earlier by Mr Tsipras as “red lines” for the government.

If Greece fails to wrap up a deal this week to unlock €7.2bn of aid, it could run out of time to legislate and implement reforms before the bailout expires at the end of the month. In an article published in Le Monde on Monday, the premier claimed the EU and IMF had shrugged off substantial concessions made by Greek negotiators.

More than 40 Syriza lawmakers signed an open letter at the weekend demanding the immediate withdrawal of Ms Panaritis on the grounds she was not qualified to represent an anti-austerity government at the IMF.

“Her political background is completely at odds with the values, perceptions and policies which Syriza represents . . . This a wrong decision,” the letter said.