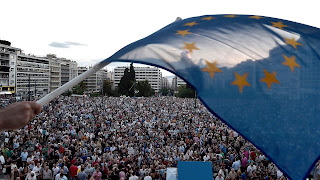 Thousands of Greeks rallied outside parliament in central Athens to urge the government to reach an agreement with its creditors that will keep the country inside Europe’s monetary union.

The protest swelled as the latest talks in Luxembourg broke down after four hours, again failing to break the deadlock over the country’s bailout plan. Demonstrators climbed the steps leading up to the Parliament, draping the walls with Greek flags and surrounding the ceremonial guard at its base.

“I’m here to support the cause of staying in Europe,” said Spyros Kasimatis, 61. “The ripple effects would be disastrous, but it’s difficult to explain this to the unemployed youth.”

The crisis over Greek debt is coming to a head, with each failed negotiating session escalating the risk of default and exit from the euro. The government of Prime Minister Alexis Tsipras vows to reject any new bailout that doesn’t ease the budget austerity that has crippled the economy, while creditors in the European Union and International Monetary Fund are demanding tighter policy to ensure that repayment continues.