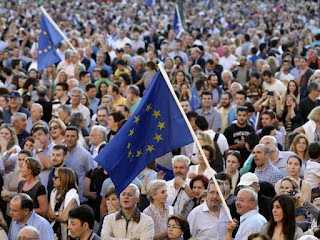 As cautious optimism began to trickle in from Brussels, thousands of Greeks were pouring into the streets of Athens to rally in support of a deal that would keep Greece in the eurozone.

Among the demonstrators waving Greek and European flags was IT consultant Dimitris, 43, and his two-year-old daughter Myrto. He said his presence at the demonstration was not political.

“We belong to the West and have enjoyed 250 years of European enlightenment that I’m not ready to give up on,” he said. “We enjoy freedoms and other privileges that the rest of the world can’t even imagine… and that’s the world I want my child to grow up in.”

Retired tour operator Panayiotis Papanikolopiloulos blamed successive administrations for the country’s predicament – not the austerity measures imposed by Greece’s creditors. “Our country not only belongs to Europe but it’s also our second home. We will lose everything if we lose the euro,” he said.

The grey, still skies on Monday evening reflected enduring concerns that talks could fail, despite the glad tidings from the government.