The tougher the better for Tsipras’ home crowd 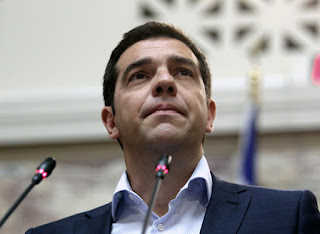 To his critics, Prime Minister Alexis Tsipras embodies the dogmatism they fear is pushing his country towards the eurozone exits.

But to his left-right coalition here, he’s made more than enough concessions already — and the more stubborn he appears, the more support he will enjoy. Despite criticism in Athens and beyond over the government’s handling of the negotiations, the anti-austerity Syriza party that catapulted Tsipras to power still appears firmly united behind its 40-year-old leader.

“Everybody backs the government’s decision to stand firm,” said Andreas Karitzis, who studied at the National Technical University of Athens with the prime minister and is now a member of Syriza’s central committee.

“We would be willing to accept even unreasonable and recessionary measures, which go against our program,” Karitzis said, “but it has to be clear that this is the last round of such measures. To guarantee that, we need a deal on the debt that solves the issue once and for all and that will allow Greece to borrow on the markets again.”