The economic consequences of austerity 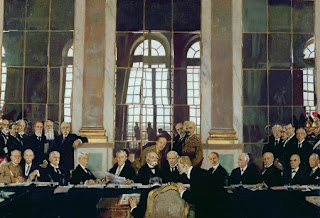 On 5 June 1919, John Maynard Keynes wrote to the prime minister of Britain, David Lloyd George, “I ought to let you know that on Saturday I am slipping away from this scene of nightmare. I can do no more good here.” Thus ended Keynes’s role as the official representative of the British Treasury at the Paris Peace Conference. It liberated Keynes from complicity in the Treaty of Versailles (to be signed later that month), which he detested.

Why did Keynes dislike a treaty that ended the state of war between Germany and the Allied Powers (surely a good thing)?

Keynes was not, of course, complaining about the end of the world war, nor about the need for a treaty to end it, but about the terms of the treaty – and in particular the suffering and the economic turmoil forced on the defeated enemy, the Germans, through imposed austerity. Austerity is a subject of much contemporary interest in Europe – I would like to add the word ­“unfortunately” somewhere in the sentence. Actually, the book that Keynes wrote attacking the treaty, The Economic Consequences of the Peace, was very substantially about the economic consequences of “imposed austerity”. Germany had lost the battle already, and the treaty was about what the defeated enemy would be required to do, including what it should have to pay to the victors. The terms of this Carthaginian peace, as Keynes saw it (recollecting the Roman treatment of the ­defeated Carthage following the Punic wars), included the imposition of an unrealistically huge burden of reparation on Germany – a task that Germany could not carry out without ruining its economy. As the terms also had the effect of fostering animosity between the victors and the vanquished and, in addition, would economically do no good to the rest of Europe, Keynes had nothing but contempt for the decision of the victorious four (Britain, France, Italy and the United States) to demand something from Germany that was hurtful for the vanquished and unhelpful for all.