The Bell Tolls for Greece, Too, Mr. Tsipras 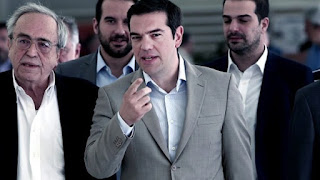 Greece and its creditors are running out of road to prevent a default. So a "J'accuse"-style article by Prime Minister Alexis Tsipras, in which he tries to pin blame for the impasse on the country's creditors and demands that they rethink their approach, is worth a careful read. There seems a good chance that it contributed to the decision of euro-area leaders to hold a top-level emergency meeting on Monday night.

The Op-ed in the French daily Le Monde appears to be part of a last-minute campaign by Greece's government to change the general perception that it has been a feckless negotiating partner, offering unserious proposals for economic reform while making equally unserious demands for Nazi war reparations from Germany, a major creditor. Tsipras also argues that the "the bell tolls" for the euro region and the International Monetary Fund if they don't stop making "absurd" demands. That threat, though, cuts both ways.

The core of Tsipras's argument is that, contrary to claims by Greece's negotiating partners that it routinely comes to the table "intransigent and without proposals," the Greek government has put forward a broad package of concrete reforms that has simply been ignored. So who is right? More importantly, who needs to do what if this slow-motion disaster is to be averted?