Syriza is not Greece 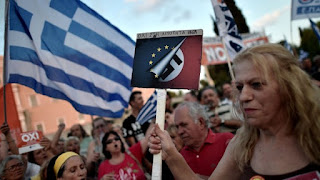 Greece has always had an ambivalent relationship with Europe. Ever since Britain led the international coalition that rescued the failing Greek independence movement in the 1820s — the original modern-era Greek bailout — Greeks have viewed Europe with a mixture of mutual admiration and suspicion. Both attitudes have deep historical roots, and have survived to the present day. This week, in the run-up to the fateful referendum that will take place next Sunday, Greeks are called upon to pronounce on which one is the stronger.

Greek equivocation over Europe was present at the creation of its relationship with the institutions of European integration. In the late 1970s — when the centre-right prime minister Konstantinos Karamanlis overcame widespread European scepticism about the country’s readiness for membership and secured Greek admission to the European Economic Community — Andreas Papandreou, the head of the official opposition, railed against the idea. In a famous exchange between the two in parliament, when Karamanlis said that Greece belongs to the west, Papandreou responded, to wild applause, that he would rather it belong to the Greeks.

In the years between 1981, the year of admission, and 2009, when the present crisis began, Greece was always the problem child of the European family — from its repeated fiscal crises and its misuse of structural funds to its inability to shut down illegal rubbish dumps. But there was also progress on a number of fronts, often under European pressure or to meet the criteria in order to participate in a common European project (above all, the euro). Greece became richer, democratic stability was entrenched, the country and its people became deeply enmeshed in European networks of politics, business, work and education.