Reform Is Not in Syriza’s Nature 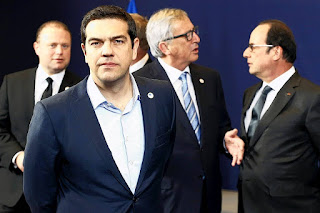 Greece’s negotiations with its creditors may finally come to a head this week. Last week Prime Minister Alexis Tsipras was presented with what creditors say is their best offer on revised terms for the bailout program, and Mr. Tsipras will soon meet with Germany’s Chancellor Angela Merkel and France’s President François Hollande. The hope is that Mr. Tsipras will face the reality that further concessions are unlikely to be forthcoming, and will accept somewhat lower targets for fiscal discipline in exchange for politically difficult pension reforms and other measures.

Mr. Tsipras may indeed be willing to strike such a bargain—for now. But no one should think that will be the end of the matter. Even if Greece’s governing Syriza party gives in to pressure and signs up for the demanded reforms, this doesn’t mean that they are going to be implemented.

The most likely outcome is that the reforms will be undermined by the ministers who are supposed to apply them. Then, after three or four months, the situation will once again reach crisis proportions, with Athens arguing that the program is not working and the creditors complaining that Syriza is not serious about implementing it.