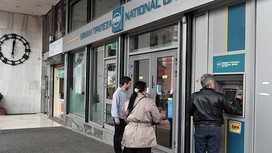 Greece looks set to enter uncharted waters this week, with the expiry on Tuesday of its creditors’ offer of a new €15.3bn rescue loan in exchange for a package of austerity and structural reforms.

Here are the key issues it faces as it lurches closer to becoming the first member state to leave the euro since the single currency was launched in 1999.

What are the next payment deadlines looming for Greece?

In the next few days, the government will have to make the usual monthly payments to pensioners and civil servants, as well as settling a €1.5bn loan repayment to the International Monetary Fund, which comes due on June 30.

Athens has already opted to bundle all the payments it had to make to the IMF this month in a single instalment, using a clause that was last used by Zambia in the 1980s, meaning it has no third option between paying up and defaulting.

Ministers have already made it clear they will prioritise paying pensioners and government employees over the IMF. Hence, in the absence of a deal, it is almost certain the fund will not see its money back for now.