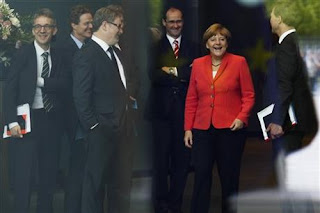 German Chancellor Angela Merkel has emerged undamaged from the global financial crisis, European bailouts, an astonishing U-turn on nuclear power and the crisis over Ukraine.

Now, with the future of efforts to resolve Greece's fiscal woes up in the air, the long-serving leader looks well-placed to emerge strong even if they fail.

Over a decade leading Europe's biggest economy, Merkel has enjoyed consistently high popularity and accumulated a store of political capital at home that would be the envy of most other leaders on the continent.

Her conservative party has a seemingly unassailable poll lead, no credible challenger is in sight and the German economy is strong. Her steady-handed, reassuring and risk-averse leadership style resonates with German voters and has earned her the nickname "Mutti," or Mama.

More
Posted by Yulie Foka-Kavalieraki at 10:06 AM