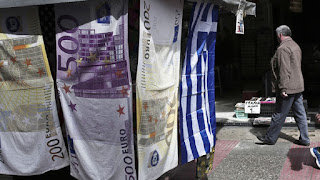 Just as Greece is defying its international creditors, the country’s mayors are defying the central government’s demands that they hand over their cash.

On Tuesday, they rejected another fund-grabbing initiative by the Syriza-led government as it scrambles to repay €1.5bn due to the International Monetary Fund on June 30 or face a sovereign default.

“If the central government wants our money, it must take legislative action to get it,” said George Patoulis, chairman of Kede, the union of Greek municipalities representing more than 400 local authorities, after a stormy debate at one point disrupted by trade unionists protesting at cost-cutting plans.

In a sign of the desperate state of Greece’s public finances, Nikos Voutsis, the interior minister, threatened legal action against mayors and local council members if they refused to pay up.

But Mr Patoulis, the centre-right mayor of Maroussi, a business and residential district in the Greater Athens area, made clear the mayors would resist the government’s cash call for as long as possible.

“Even if legislation is passed, we will hand over our funds only if they are the last drop needed to prevent the country going bankrupt,” he said.