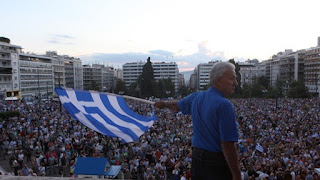 The never ending sturm und drang over the state of Greek debt, membership in the euro zone and the potential shocks of a debt default have moved from tragedy to comedy to monotony.

The solution is simple. It won’t be fast, it won’t be easy, but it will be a huge improvement for all concerned.

Hey Greece -- if anyone is listening -- just default on the debt and start anew. The rest of Europe has caused the country and everyone else enough agita: just let Greece leave the euro zone in peace. Sure, it will be a long torturous process, but at least Greece -- and maybe the euro region -- will start moving in the right direction.