It’s Not the Economy, Stupid 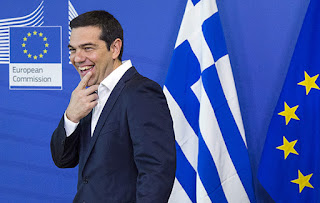 Default, bankruptcy, Grexit, crash: If you feel you’ve read before that these things were about to happen in Greece, that’s because you have. Every debate about Greece’s financial crisis deteriorates rapidly into a discussion of deadlines: repayments, refinancings, meetings of the International Monetary Fund or the European Central Bank. Until now these deadlines have always resulted in further delay. Another one is coming on June 30. That’s when Greece owes $1.7 billion more it doesn’t have.

If you’ve tried to keep up with these stories, you may become lost in economic jargon. Greece, which can no longer borrow money on capital markets, is now wholly dependent on international and European financial institutions. To ensure that they are not throwing good money after bad, these institutions have placed restrictions on Greek government spending. Greece, in turn, has sought to dodge these restrictions and negate agreements, exploiting the rules in mind-boggling ways, borrowing from one account to pay back another. It takes a special head for numbers to follow the saga.

And yet—the numbers don’t really represent what is at stake. The crisis in Greece is not, at base, an economic story: It is a political story, a story about the promises that governments make to their citizens and about the ability of any state to guarantee a particular standard of living to its citizens, not only in Greece but all over Europe.