If Greece Defaults, Imagine Argentina, but Much Worse 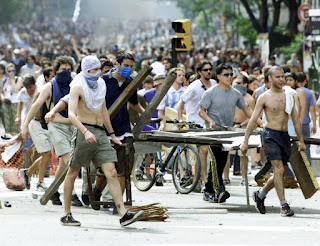 by James B. Stewart

There may be a one-word explanation for why Greece will ultimately capitulate to European demands for more austerity:

Greece is hardly the first nation to face the prospect of defaulting on its sovereign debt obligations. Argentina has defaulted on its external debt no fewer than seven times since gaining independence in 1816, most recently last year. But it’s Argentina’s 2001 default on nearly $100 billion in sovereign debt, the largest at the time, that poses a cautionary example for Greece.

Should Greece default, “Argentina is an apt analogy,” said Arturo C. Porzecanski, a specialist in international finance at American University and author of numerous papers on Argentina’s default. But for Greece, “It would likely be worse. Argentina was comparatively lucky.”

Daniel Gros, director of the Center for European Policy Studies in Brussels and the author of “A Tale of Two Defaults,” a paper comparing Greece and Argentina, agreed. “Default would be much worse for Greece than it was for Argentina,” he said.