How a Greek debt deal could work 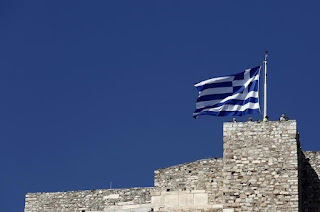 Athens has struggled to get its euro zone creditors to talk about debt relief. That is because it is not the most urgent issue facing Greece. A short-term cash crunch could trigger bankruptcy in the next few weeks. But if the negotiators resolve the immediate crisis – and the omens don’t look good – debt relief should come onto the table.

The debt, which was restructured in 2012, is huge – 313 billion euros or 175 percent of its gross domestic product. But the bulk, about 184 billion euros, is now owed to euro zone governments and pays low interest. What’s more, Greece doesn’t have to start repaying it until 2020 and then has over 30 years to finish the job. The present value of this debt, what it is worth today, is therefore much lower than its official face value.

The private debt isn’t an immediate problem because most of it has also been rescheduled to stretch out over a long period of time. Nor are the treasury bills, as Athens is still able to roll them over as they come due.

However, the ECB and IMF debt is problematic because most of it comes due in the next five years. Indeed, there is a crunch in the next few months, with over 10 billion euros of repayments by the end of September.