Greeks Brace for More Economic Pain, Bailout Deal or No 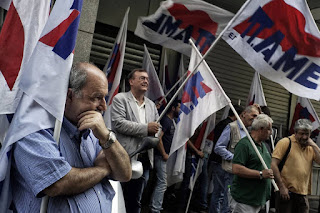 As Greece lurches toward climb-down or collision with its creditors, an exhausted population is bracing for more economic pain—either way.

Panagiotis Koupalidis, a 68-year-old retiree, is supporting his wife as well as their three grown children, who lost their jobs in Greece’s depression, on a pension of €700 ($790) a month. That is just over half what it was before the austerity measures imposed by creditors as the condition for bailout loans.

Now Mr. Koupalidis reads reports that eurozone authorities and the International Monetary Fund want pensions cut further, and wonders how his family and a great many other households in their position will cope.

“The creditors are acting like grave diggers,” he says. “They want to send us pensioners to an early grave.” 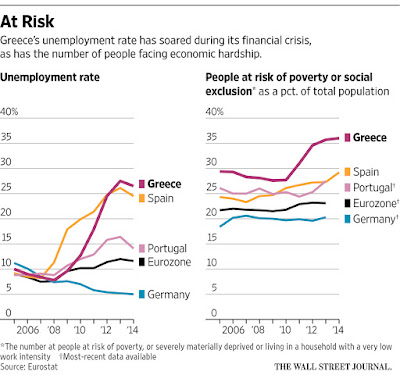 Posted by Yulie Foka-Kavalieraki at 9:49 PM