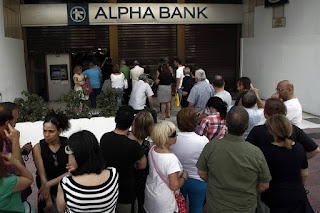 The collapse on the weekend of last-ditch talks to extend Greece’s bailout means Athens won’t be able to afford a €1.55 billion debt payment due to the International Monetary Fund on Tuesday, the day the 2012 bailout agreement expires. The European Central Bank said Sunday it won’t increase its liquidity assistance to Greek banks, and Greece ordered banks not to open Monday to avoid more deposit flight.

None of this automatically triggers a euro exit. But it’s hard to see how Greece could stay in the currency bloc for long if it defaults on its debt, refuses to implement fiscal and economic reforms and, in all likelihood, imposes capital controls.

This marks a long fall in the five months since Alexis Tsipras and his far-left Syriza Party were elected on a platform of rolling back reform. Ahead of January’s parliamentary vote, the economy had started growing again after four years of recession and a contraction of around 25%. Athens in 2014 sold bonds to private investors for the first time since 2010 and was on the verge of exiting its 2012 program.

More
Posted by Yulie Foka-Kavalieraki at 12:08 AM