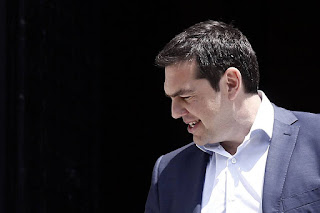 Greek Prime Minister Alexis Tsipras lambasted creditors for their handling of his country’s debt crisis on Tuesday, but suggested that a coming summit of European leaders could be the decisive moment in the drawn-out negotiations.

As time ticks down for a deal, Athens and the lenders remain at odds over how far Greece is willing to bend to meet demands for austerity in exchange for funds desperately needed to avoid a default. The dispute is likely to come to a head by a European summit on June 25, or possibly earlier, at which either Mr. Tsipras or German Chancellor Angela Merkel may have to back down.

In a speech to party lawmakers, Mr. Tsipras said that Greece cannot accept deeper austerity demands from its international creditors—other eurozone countries and the International Monetary Fund—accusing them of trying to humiliate the country and the IMF of having “criminal responsibility” for the country’s current economic woes.

But he also said Athens must end the uncertainty weighing on the economy amid speculation that it may exit the single currency zone.