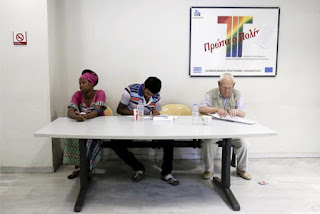 When Greece's tax police squad raided a busy cafe-restaurant in an upscale central Athens district earlier this year, it discovered two cash registers and an elaborate system of issuing fake receipts -- at least 15,000 of them, over four years.

Four months later, the cafe has been shut but local tax authorities have yet to pin down the exact amount of revenue the business concealed. A date for a court hearing for one of the owners has not yet been set, police officials say.

The cafe's misdeeds are one of the more flagrant cases of tax evasion to emerge this year, but monthly reports by Greece's financial crimes units highlight just how common tax dodging is, from doctors to farmers to contractors and civil servants.

That, and the prevalence of small- and medium-sized businesses and the self-employed, as well as the sizeable shadow economy, shows just how difficult it is to crack down on Greece's corruption and tax evasion, which leftist Prime Minister Alexis Tsipras has made one of his priorities.