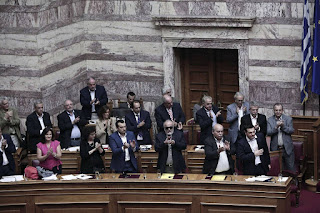 Greek lawmakers gave the green light early Sunday to a proposal by the coalition government to hold a referendum on whether austerity measures demanded by lenders in exchange for further aid should be accepted by the crisis-hit nation.

In Greece’s 300-seat parliament, lawmakers voted 178-120 in favor of the referendum, while two abstained.

Greece has called a referendum for July 5 on the austerity plan that includes pension cuts and steep value-added tax increases that the rest of the eurozone and the International Monetary Fund are demanding that Athens complete to maintain funding from its €245 billion ($274 billion) bailout.

In a 14-hour, often heated debate in parliament, officials from the ruling leftist party Syriza moved to quash talk that a rejection of the austerity plan will result in the country exiting the euro bloc amid continued strong public support for the country’s membership in the single-currency zone.

More
Posted by Yulie Foka-Kavalieraki at 3:49 AM