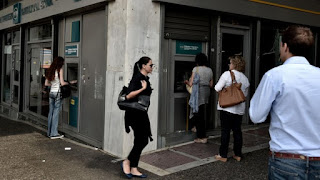 Until this week, the big suspense surrounding Greece was whether Athens would be able to meet a €1.6bn debt repayment to the International Monetary Fund due at the end of June or go bankrupt.

But the fear of default is rapidly being overtaken by a separate — and possibly more dangerous — ticking time bomb: the solvency of Greece’s banks.

As anxious savers withdraw deposits, economists warn that Greece’s precarious lenders could collapse. During a meeting of eurogroup finance ministers on Thursday, Benoît Cœuré, a member of the European Central Bank’s board, speculated that Greek banks might not be able to open for business on Monday.

The European Central Bank has provided crucial, emergency funding to Greek banks that has sustained them in recent months. Yet as Greece’s finances continue to deteriorate, the ECB’s own rules may soon prevent it from extending further help, paving the way for a Greek exit from the eurozone.

“The fate of Greek banks hinges on political developments, which will affect both their liquidity and their solvency,” said Jonas Floriani, an analyst at KBW Research.