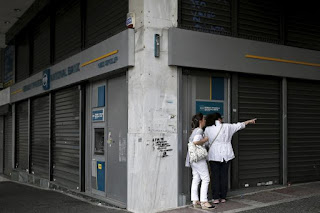 Greek savers pulled more than 1 billion euros from banks in one day on Thursday, three senior banking sources told Reuters, with the pace of withdrawals gaining speed since talks between the government and its creditors collapsed last weekend.

The withdrawals between Monday and Thursday have reached about 3 billion euros (£2.1 billion), representing about 2.2 percent of household and corporate deposits held by Greek banks at the end of April.

"There are no lines or panic, it has been a quiet and gradual phase of withdrawals," one of the bankers said. "They are due to worries whether a deal will be clinched with the country's lenders."

More
Posted by Yulie Foka-Kavalieraki at 10:36 AM