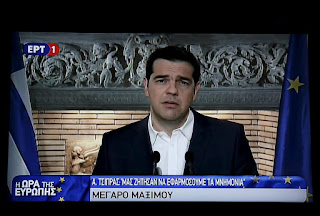 Greek Prime Minister Alexis Tsipras called a referendum on austerity demands from foreign creditors on Saturday, rejecting an "ultimatum" from lenders and putting a deal that could determine Greece's future in Europe to a risky popular vote.

The surprise call marked the most dramatic twist yet in five-month negotiations between Greece and its lenders, plunging the cash-strapped nation into uncharted waters and risking a default and capital controls as hopes for an aid agreement faded.

After a week of acrimonious talks in Brussels, Tsipras dismissed lenders' proposals as "blackmail" before flying to Athens to huddle with ministers. After midnight, he appeared on television to announce plans for a referendum on July 5.

"Our responsibility is for the future of our country. This responsibility obliges us to respond to the ultimatum through the sovereign will of the Greek people," Tsipras said in a televised address to the nation.

More
Posted by Yulie Foka-Kavalieraki at 11:43 AM