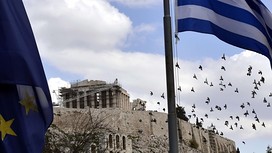 When a western European country delays repaying a loan to the International Monetary Fund using a mechanism previously employed by Zambia, it is safe to conclude that its economic governance has gone awry.

Greece announced this week that it would bundle together reimbursements to the IMF at the end of the month rather than meet the deadline for a single payment on Friday, a tactic last used by the southern African country 30 years ago.

This is not catastrophic. It does not mean the country is in general default to all its creditors. But it does underline that, with each passing week, Greece is heading closer towards rupture.

At best this means the imposition of capital controls; at worst it entails an irrevocable exit from the euro. This is neither inevitable nor desirable. Greece’s departure from the euro would damage its economy and weaken the long-term credibility of the currency union. Yet this is the primrose path down which Athens is heading.

Greece’s excuses are running out. This week, its creditors — the eurogroup of the currency’s member countries, the IMF and the European Central Bank — presented a more unified front than previously. In a paper, they proposed that Greece should increase VAT to improve a slipping fiscal position, commit to maintain deregulation of labour markets and enact cuts to its bankrupt pension system.