Greece running out of options to avoid capital controls 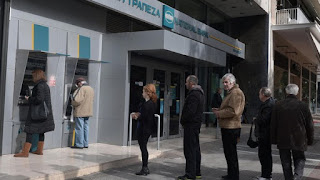 Just a few months ago, the possibility that capital controls would be imposed in Greece still seemed distant.

But with the government fast running out of money — and nervous depositors pulling cash from the country’s banks — talk of such extraordinary measures is widespread and analysts are warning Athens may soon be forced to employ them.

“We are four to six weeks away from the possible imposition of capital controls,” said Daniel Gros, director of the Centre for European Policy Studies think-tank in Brussels. “There is always some temporary solution [eurozone politicians] can pull out of thin air, but now we are getting really close.”

Were Greece to default on a €1.5bn payment to the International Monetary Fund due at the end of June, the situation could spiral out of control, forcing the hand of policy makers. Greece could then be forced to repeat the experience of Cyprus and Argentina, which chose to intervene to stop their banks bleeding deposits in order to avoid insolvency.

But imposing capital controls would hardly be straightforward.