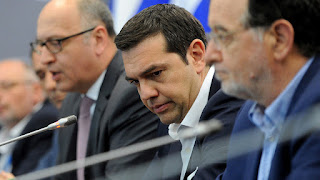 As the crunch approaches the atmosphere has changed. For six months the centre right in Greece was prepared to wait and let Alexis Tsipras try – and fail – to secure a letup on austerity. Now the old political establishment has understood he intends to take this to the bitter end: a default on Greece’s June payment to the IMF, with possible dire consequences for the banks as early as Monday night.

The ECB’s life support facility – known as Emergency Lending Assistance (ELA) – is conditional on Greece being “in a programme” agreed with lenders. I understand on Friday it was only the intervention of Mario Draghi, the ECB’s boss, that prevented the termination of ELA.

So on Thursday, amid an accelerating bank run that has seen €5bn withdrawn this week, the opposition took to the streets.

Posted by Yulie Foka-Kavalieraki at 4:00 PM