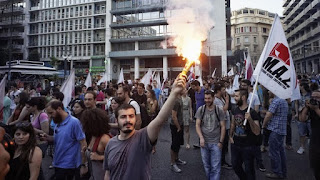 Athens insisted on Friday that it was still negotiating with its creditors to unlock €7.2bn in desperately needed bailout aid, but showed little sign of acquiescing to their demands for concessions on economic reform.

A day after the International Monetary Fund pulled its officials out of talks and EU leaders said it was decision time for Greece, Athens said it had submitted a new plan that included debt restructuring but excluded cuts to pensions, elements rejected by bailout monitors earlier this week.

According to a Greek government official, the plan should also include “low” budget surplus targets this year and next; creditors have sought surpluses of 1 per cent of economic output this year and 2 per cent in 2016. Those levels are significantly below the current bailout programme’s targets, but higher than Athens has sought.

Negotiations between Athens and its creditors have ground to a halt just days before a critical meeting of eurozone finance ministers next week that officials believe may be the final chance for a deal to be struck to avoid a Greek default.