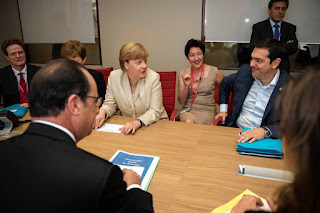 Greek Prime Minister Alexis Tsipras called a surprise referendum for July 5 on the tough economic policies the country’s creditors want in exchange for more rescue funding, escalating the drama surrounding the country’s long-running bailout and deepening doubt over Greece’s fate in the eurozone.

Addressing the nation at 1 a.m. in Athens, Mr. Tsipras told a television audience that Greek voters should have their say on the economic retrenchment that other eurozone countries and the International Monetary Fund are demanding of Greece. He said he couldn't accept the list of policies that creditors presented in Brussels this week, which include some drastic tax hikes and sharp cuts to government spending, including on pensions.

Most European policy makers were taken by surprise by the Greek premier’s announcement, though Mr. Tsipras said he had informed German Chancellor Angela Merkel and French President François Hollande about his decision.

The Greek government will ask voters to reject the creditors’ terms in the referendum, Interior Minister Nikos Voutsis said Saturday.