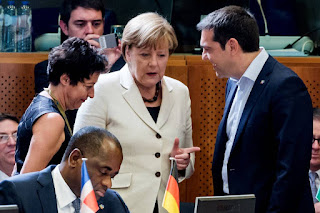 As Greece hurtles toward a collision with its creditors in late June, German Chancellor Angela Merkel faces one of the hardest choices of her career: whether to let Greece default, or to bend Europe’s bailout rules and risk a revolt at home.

Greece’s rejection of its creditors’ terms for bailout aid—which Prime Minister Alexis Tsipras repeated in stark terms on Monday—points to a likely showdown at a European summit on June 25, or possibly days earlier, when either the German or the Greek leader must perform a dramatic U-turn to keep Greece’s bailout program on course.

For months, Ms. Merkel has sought to convince Mr. Tsipras that Greece will only receive financial aid from Europe if it enacts tough austerity and economic overhauls, approved by inspectors from the EU and the International Monetary Fund. But Berlin officials are increasingly resigned to Mr. Tsipras refusing to swallow such terms until it is too late.

Without a massive last-minute climbdown by Greece, that means Ms. Merkel will soon be forced to make the choice that Mr. Tsipras has been trying to confront her with all year: between relaxing Greece’s required overhauls, or potentially jeopardizing European stability.