Explainer: If Greece leaves the euro 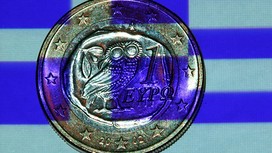 What happens once a country leaves the euro?

On financial markets a new currency first needs a new currency code that can be identified by computers for trading and payments. They are issued by the Swiss-based International Standards Organisation, a worldwide federation of national standards. It provides an alphabetic three-character code, with the first two letters representing the country and the third the name of the currency. In Greece’s case it could not go back to its old code for drachma, GRD, because there are still some outstanding payments to be made. It would require a new code, most likely GRN.

After that, the code must be entered into software and payments systems so the computers can recognise it for payments processing and trade confirmations and other critical but unseen functions. Market infrastructure providers say this can be done in one business day if needed.

Is that really all it takes for markets?

In reality it requires far more. Switching over to a new currency is trickier when it comes to resolving long-dated forward financial contracts, such as swaps and options.

There is a host of legal questions that have to be resolved as payments are switched from one currency to another. Some trades may have to be modified or even rebooked. It is far from an impossible job, but as it involves legal changes, it is a slow and careful process.