Europe’s dream is dying in Greece 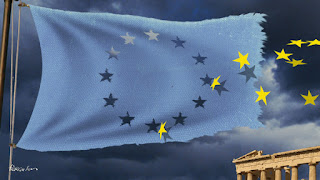 The shuttered banks of Greece represent a profound failure for the EU. The current crisis is not just a reflection of the failings of the modern Greek state, it is also about the failure of a European dream of unity, peace and prosperity.

Over the past 30 years Europe has embraced its own version of the “end of history”. It became known as the European Union. The idea was that European nations could consign the tragedies of war, fascism and occupation to the past. By joining the EU, they could jointly embrace a better future based on democracy, the rule of law and the repudiation of nationalism.

As Lord Patten, a former EU commissioner, once boasted, the success of the union ensured that Europeans now spent their time “arguing about fish quotas or budgets, rather than murdering one another”.

When the Greek colonels were overthrown in 1974, Greece became the pioneer of a new model for Europe — in which the restoration of democracy at a national level was secured by a simultaneous application to join the European Economic Community (as it then was).