Europe Asks the Impossible of Greece 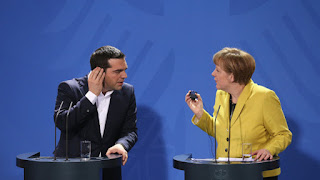 Suppose for a moment that the European Union gets what it's demanding from Greek Prime Minister Alexis Tsipras. It doesn't look as though that will happen, but let's imagine that Tsipras surrenders. How long, I'm wondering, would this smell like victory?

Tsipras has agreed to the EU's new, less demanding targets for Greece's primary budget surplus over the next few years. The sticking point is that the measures he would use to hit those targets aren't enough.

Instead of raising the rate of value-added tax (a kind of sales tax) and/or collecting it on a wider range of goods, Tsipras says he'll attack tax evasion and fraud. That won't raise enough money, says Europe. The EU wants more cuts to public spending on pensions as well, which Tsipras refuses to consider. For some reason, Europe has also been insisting on further labor-market reforms. These would doubtless be desirable, but they're unlikely to yield extra growth in the short term and therefore have no fiscal implications in the relevant timescale.