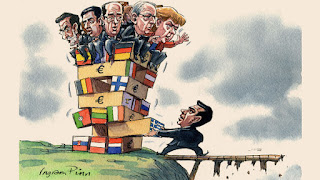 The outbreak of the first world war was, we are told, greeted with confidence and jubilation by the peoples of Europe. Something similar seems to be happening after years of economic crisis and political turmoil in Greece. A growing number of people feel that enough is now enough. The strident views expressed in these pages by the Italian economist, Francesco Giavazzi, are shared by many in high office. Meanwhile, Alexis Tsipras, the Greek prime minister, accuses Greece’s creditors of “pillaging” his country.

Olivier Blanchard, the International Monetary Fund’s sober chief economist, indicates that a deal might still be reached. But many are beginning to long to see the knot cut. Whatever game the Greeks thought they were playing, their government may now just desire an end to the humiliation. Similarly, whatever game the eurogroup may have been playing, it may now just want an end to the frustration. If so, Greek default, exit and devaluation could be fairly close.

Would euphoria then last? I fear not. The assumption of some in the eurozone is not only that the Greek case is unique, but that the disaster those sinners so deserve would improve the behaviour of everybody else. But the currency union would also no longer be irrevocable. New crises will occur. When they do, confidence in the union would be less than complete after a Greek exit. The programme of Outright Monetary Transactions, announced by the European Central Bank in 2012, might need to be implemented, to calm nerves. But it could fail. Self-fulfilling speculation could force even more divorces. 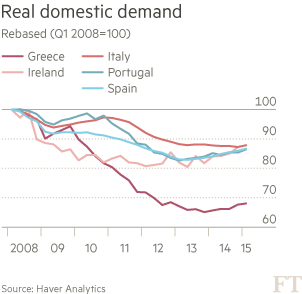 Posted by Yulie Foka-Kavalieraki at 8:01 PM