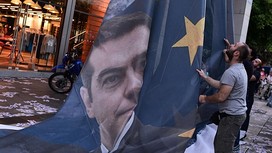 Hours after receiving an ultimatum from Greece’s creditors, Alexis Tsipras looked more relaxed than rattled. He was schmoozing with supporters at a late-night party in Athens to celebrate the relaunch of ERT, the state broadcasting channel shut two years ago by the previous centre-right government.

“ERT belongs to the people and we are making it truly a public broadcaster!” the prime minister enthused to applause from hundreds of employees who were reappointed this month, thanks to Mr Tsipras’ intervention.

To backers of his hard-left Syriza party, the reopening of ERT came as another long-awaited reversal of humiliating bailout reforms associated with the hated “troika” — the European Commission, the International Monetary Fund and the European Central Bank. Others include an unprecedented tax amnesty and the rehiring of several thousand civil servants made redundant last year.

The ERT fete provided a brief respite for a young leader facing the toughest decision of his stormy five-month premiership: whether to sign a new bailout deal in the next few days that would include more of the harsh austerity he campaigned against as opposition leader, or plunge Greece into a messy default and possible exit from the eurozone.