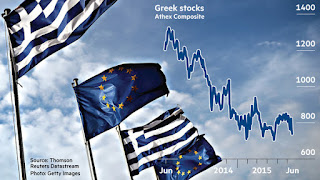 Alexis Tsipras, the Greek prime minister, vowed not to give in to demands made by his country’s international creditors, accusing them of “pillaging” Greece for the past five years and insisting it was now up to them to propose another rescue plan to save Athens from bankruptcy.

Mr Tsipras’s remarks came less than 24 hours after the collapse of last-ditch talks aimed at reaching agreement on the release of €7.2bn in desperately needed rescue funds. The comments were part of a chorus of defiance in Athens that left many senior EU officials convinced they can no longer clinch a deal with Greece to prevent it from crashing out of the eurozone.

Without a deal to release the final tranche of Greece’s current bailout, Athens is likely to default on a €1.5bn loan repayment due to be paid to the International Monetary Fund in two weeks, an event officials fear would set off a financial chain reaction from which Greece would be unable to recover.

“One can only suspect political motives behind the fact that [bailout negotiators] insist on further pension cuts, despite five years of pillaging,” Mr Tsipras said in a statement. “We are carrying our people’s dignity as well as the aspirations of all Europeans. We cannot ignore this responsibility. It is not a matter of ideological stubbornness. It has to do with democracy.”

More
Posted by Yulie Foka-Kavalieraki at 9:42 AM