Chronicle of a struggle 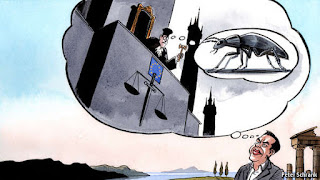 Since taking office in January Greece’s radical-left government has been a model of inconstancy and incoherence. Yet one of its messages has been admirably consistent: that Greece’s problems belong to the entire euro zone. Over the past four months Greece’s creditors have become wearily accustomed to batting away grandiose proclamations by Alexis Tsipras’s band of merry men. But as their talks with the Greeks approach a crunch, this is a proposition they should take seriously.

Excluded from capital markets, Greece needs bail-out money to stay afloat. In exchange its creditors demand reforms and budget cuts designed, as they see it, to put Greece’s finances on an even keel. Elected to reject such austerity, the Syriza government began negotiations with smiles and good cheer. Yanis Varoufakis, the finance minister, toured Europe to explain that the euro zone would work for the benefit of all if only its leaders would abandon their self-defeating obsession with austerity. But as the mood has soured and talks have gone nowhere, the message has taken on a darker tone. In an opinion piece for Le Monde this week Mr Tsipras declared that the strategy adopted by Greece’s creditors risked “the split and division of the euro zone, and consequently of the EU”. Those who wish to maintain this approach, he suggested, should re-read Hemingway’s For Whom the Bell Tolls, a brutal account of the Spanish civil war.

It is understandable that the leader of a country staring into the abyss might be drawn to apocalyptic imagery. But Hemingway’s clipped sentences do not quite capture the absurdity that has marked the latest episode of the Greek saga. A better guide is surely Kafka. For the Greeks, the impenetrable “institutions” they have encountered, seemingly impervious to reason and answering only to their own mysterious laws, resemble the bureaucracy that breaks the spirit of Josef K in The Trial. Euclid Tsakalotos, a senior Greek negotiator who has a Marxist background, likens the creditors’ robotic insistence on demand-killing labour reform to the intransigence of Soviet pen-pushers.