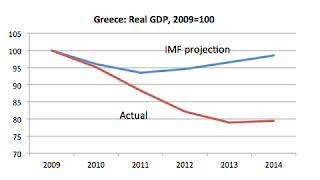 I’ve been staying fairly quiet on Greece, not wanting to shout Grexit in a crowded theater. But given reports from the negotiations in Brussels, something must be said — namely, what do the creditors, and in particular the IMF, think they’re doing?

This ought to be a negotiation about targets for the primary surplus, and then about debt relief that heads off endless future crises. And the Greek government has agreed to what are actually fairly high surplus targets, especially given the fact that the budget would be in huge primary surplus if the economy weren’t so depressed. But the creditors keep rejecting Greek proposals on the grounds that they rely too much on taxes and not enough on spending cuts. So we’re still in the business of dictating domestic policy.

The supposed reason for the rejection of a tax-based response is that it will hurt growth. The obvious response is, are you kidding us? The people who utterly failed to see the damage austerity would do — see the chart, which compares the projections in the 2010 standby agreement with reality — are now lecturing others on growth? Furthermore, the growth concerns are all supply-side, in an economy surely operating at least 20 percent below capacity.