Alexis Tsipras grounded by dissent from within Syriza 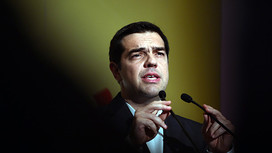 After four hours of discussions with EU leaders in Brussels on Wednesday night, Alexis Tsipras was planning to return on Friday in hopes of at last sealing a bailout deal with creditors.

But the Greek prime minister has been grounded by a torrent of anger and resistance from his Syriza party. Instead of flying to Brussels, he will on Friday be appealing to a restive parliament in Athens with his government — and the country’s financial future — on the line.

“The overwhelming sentiment in the [Syriza] parliamentary group will be one of rejection,” Antonis Kamaras, a Greek political commentator, said of the bailout terms being offered by creditors. “It’s hard to see how the leadership can prevail.”

Mr Tsipras had called Wednesday’s talks “constructive and friendly.” But a senior Greek official said the International Monetary Fund, which was not represented at the meeting, had imposed new conditions that had not been tackled in earlier negotiations in Brussels.

Back in Athens, Mr Tsipras later told aides: “Extreme proposals are not acceptable to the Greek government. We must all understand how much people have suffered in the last five years and games must stop being played at their expense.”