A modern Greek tragedy – the crisis years in context

During the six years from 2007 to 2013 the annual output of the Greek economy fell by more than 26 per cent. On the FT's statistics desk we wanted to know how that fall ranked compared with sustained periods of economic retrenchment and dislocation in other countries. 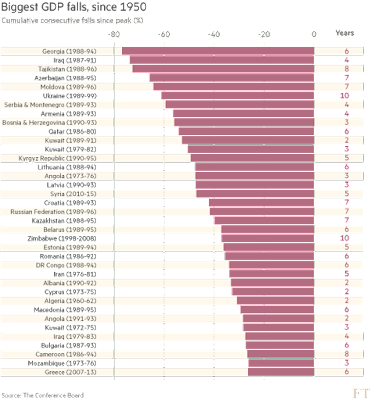 We crunched data from the US Conference Board, which has real gross domestic product, adjusted for purchasing power, for most countries in the world, going back to 1950 (with estimates for this year).

We identified the biggest consecutive falls in annual GDP from peak to trough. Ranking periods ranging from one to 10 years, we found that the Greek economy had the largest contraction of any advanced economy since 1950.