What to make of the new “Juncker Plan” for Greece? 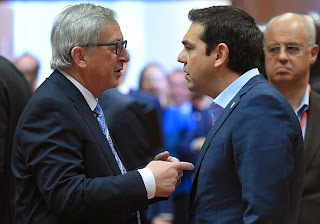 The Greek daily To Vima has a nice scoop this afternoon about a document they’ve been leaked purporting to be a new proposal from Jean-Claude Juncker, the president of the European Commission, on how to break the standoff between Athens and its creditors.

According to the To Vima report, the plan envisions a deal with Greece that completely cuts out the International Monetary Fund and releases about €5bn in aid to Athens from three different sources: the €1.8bn remaining in the EU’s portion of the current bailout; €1.9bn in profits from Greek bonds purchased by the European Central Bank back in 2010; and another €1.3bn or so in additional Greek bond profits the ECB will get in July.