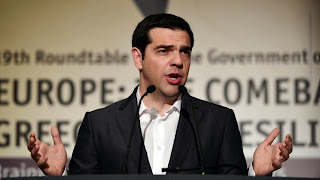 Alexis Tsipras, the Greek prime minister, won backing from his radical Syriza party to conclude a bailout deal in the face of opposition from an extreme left faction that warned against giving in to “blackmail” by the country’s creditors.

Greece was in the final stretch of negotiations and would accept a viable “but not a humiliating” agreement, the premier told a meeting of Syriza’s 350-strong central committee, without giving details of the talks with the EU and International Monetary Fund.

Government officials in Athens claim a deal could be struck by the end of this week. But European partners say the two sides are still far apart on issues Mr Tsipras calls “red lines we cannot cross”, including pension reforms and increases in value-added tax, according to several people with knowledge of the negotiations.

The two-day meeting, which was staged to review the Syriza-led government’s first 100 days in power, endorsed the leadership’s stance that if the government’s cash crunch escalated “to an extreme point”, paying pensions and public sector wages would take priority over meeting repayments of bailout loans.

“Our commitment above all is to protect workers and pensioners who have been the victim of austerity,” said one participant.