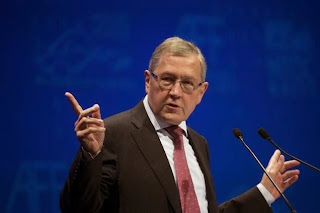 Time is running out for Greece to reach an agreement on reforms with lenders and there will be no further funds for Athens without it, the head of the European Stability Mechanism Klaus Regling told Germany's Bild newspaper on Tuesday.

"There is little time left," Regling told the best-selling newspaper. "That's why we're working day and night for an agreement. Without an agreement with the creditors, Greece will not get any new loans. Then there's a threat of insolvency. There are a lot of risks contained in that," he added.

"Even missing a payment to the IMF would be dangerous. That would have an effect on other lenders like us. On the other hand, the rescue fund can only extend loans when reforms are implemented. That is also the case now and that's the only way Greece will be able to restore its economy's fiscal health," he said.