The sorry saga of Syriza 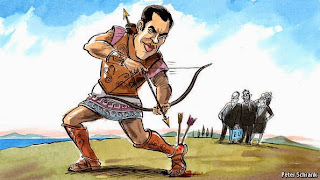 In recent months the walls of the B. & M. Theocharakis Foundation in Athens have been lined with mementoes of European support for Greece’s freedom. “Philhellenism”, an exhibition, tells the story of the material and moral backing that Romantics like the English poet Byron gave Greece during its independence fight against the Ottomans. The contemporary resonances are obvious. Showing some children around, Dimitra Varkarakis, who with her husband, Michael, owns the works on display, pointed to a German painting. One girl stopped short. “Aren’t we in a fight with Germany?” she asked. “No,” replied Mrs Varkarakis. “We are all friends.” After recounting this tale she casts Charlemagne an earnest look. “Europeans,” she says, “must love each other.”

That is a noble aim, for some Europeans have lately struggled even to speak to each other. Two weeks ago, after a particularly disastrous meeting, Yanis Varoufakis, Greece’s finance minister, declared that he welcomed the hatred directed against him in the euro zone. After more than three months of fruitless negotiations with Mr Varoufakis, the reserves of Philhellenism among Greece’s partners have run utterly dry. “They are living in cloud-cuckoo land,” says one Brussels official.

Perhaps it was naive to expect anything else. A few years ago many of the men now in charge spent their time discussing the contradictions of capitalism over coffee and cigarettes. Few had ever run anything, let alone a government. Their European contacts were limited. Syriza, their party, typically won only 3-4% of the vote. But Greece’s economic calamity transformed its prospects. In 2012 it came within a whisker of power. And after January’s election it went one better, forming a governing coalition.