The Other Damage Greece’s Government Is Doing 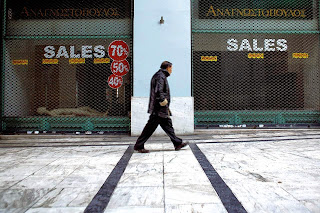 Greece mostly attracts attention these days for the difficulty it’s experiencing negotiating new terms with its creditors. But that’s only half the story. Over the past four months an economy that had barely managed to grind into first gear last year has shifted back into reverse.

The European Union’s spring economic forecast, released this week, now predicts Greece’s economy will grow by a mere 0.5% this year. Only three months ago the EU expected Greece to expand by 2.5% in 2015. Because this economic contraction weighs on tax receipts, the International Monetary Fund now expects Athens will run a fiscal deficit before debt service this year. Even if the government succeeds in its negotiating aim to set a target primary surplus of 1.5% instead of 3% for 2015, it would take significant further fiscal retrenchment to meet it.

Such a downturn was far from inevitable. Investing in Greece had always been difficult, even before the crisis that began in late 2009. The sclerotic bureaucracy, the corruption, the ever-shifting tax rates and the constant danger of judicial deadlock meant that Greece had some of the lowest foreign-direct-investment rates in the eurozone. The crisis, and above all the threat of a Greek exit from the common currency, made this considerably worse.