The Only Three People Worth Listening to on Greece 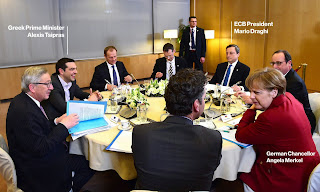 As Greece hurtles toward another denouement, figuring out who to listen to can be a challenge.

One minute Finance Minister Yanis Varoufakis is moving Greek bond yields by saying a deal is imminent. The next, his claims are being shot down by Germany’s Wolfgang Schaeuble. The result has pushed securities this way and that while giving few clues as to how the crisis will eventually play out.

“You’ll have to take your guidance from these three,” ING Diba’s chief economist, Carsten Brzeski, said in a telephone interview. “While Merkel is keeping a low profile with her comments, she plays a crucial role.”

In charge of Europe’s economic powerhouse for a decade, Merkel has been around since the opening act of the Greek crisis and will be critical in deciding how it ends, juggling voter saturation at subsidizing Greece with the desire to avoid a breakup of the euro. Leading the opposite camp is Tsipras, playing hardball to end the austerity, humiliation and suffering of the Greeks. In the middle, the Italian-born central banker is doing whatever it takes to preserve the euro.