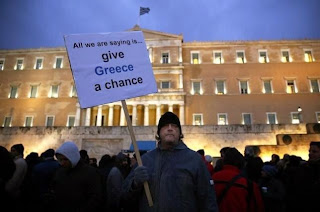 German Finance Minister Wolfgang Schaeuble has told Reuters the Greek government's optimism about clinching a cash-for-reforms deal with its lenders within days is not backed up by the negotiations, and he cannot rule out Greece becoming insolvent.

Greek Finance Minister Yanis Varoufakis said on Monday that an agreement could be reached within a week.

But Schaeuble said reports from the International Monetary Fund, the European Central Bank and the European Commission on their negotiations with Athens suggested talks were progressing "very hesitantly".

"What I know from discussions with the three institutions does not back up the optimism arising from announcements from Athens," Schaeuble said in an interview on Wednesday.

"There is not yet any substance to the mere announcement that we are closer to an agreement. This is still within the realms of atmosphere."