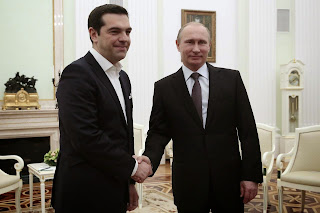 Russia’s President Vladimir Putin said Thursday he was ready to consider financial help for debt-stricken Greece, so long as Athens signs up to a project to bring more Russian gas to Europe.

Greece’s leftist government, which is locked in negotiations on economic overhauls with its international creditors, has hoped to receive an economic boost from Russia.

But despite a trip to Moscow by Greece’s Prime Minister Alexis Tsipras in early April, Athens has so far failed to secure any help, either in the form of cheaper natural gas supplies or an exemption from Moscow’s ban on European food imports.

Both Mr. Tsipras and Mr. Putin said at the time Greece wasn't looking for financial aid.