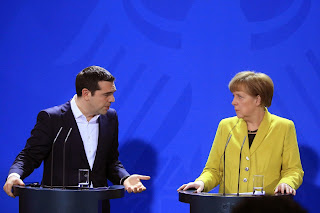 German Chancellor Angela Merkel is coming under growing pressure from within the ranks of her own party bloc to give up on Greece for the sake of the euro.

Members of Merkel’s Christian Democratic bloc are openly challenging her stance of keeping Europe’s most-indebted country in the 19-nation currency region. Even some officials in the Finance Ministry are leaning toward the conclusion that the euro area would be better off without Greece, two people familiar with the matter said.

“The euro would be strengthened if Greece left,” Alexander Radwan, a Merkel-affiliated lawmaker who voted for granting Greece a temporary extension of its bailout in February, said in an interview. “The other countries could then move closer together and apply the rules more strictly.”

With European finance ministers due to resume talks on Greece on Monday, hardening sentiment in Germany risks sending mixed signals to investors as Prime Minister Alexis Tsipras’s government attempts to reach a deal with creditors.