Meet One of the Most Hated Men in Greece 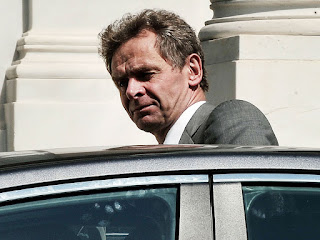 When the IMF’s point man on Greece, Poul Thomsen, rebuffed the nation’s proposal in December to unlock more bailout funding, he wound up making his job even tougher.

The Greek government’s failure then to secure an agreement with its creditors helped pave the way for its defeat in January by the anti-austerity Syriza party. Instead of negotiating with Greece’s establishment, Thomsen finds himself facing a novice group whose leaders have likened the lenders’ conditions to “fiscal waterboarding.”

Now the 60-year-old Danish economist is holding his ground against Syriza economic plans that fail to meet International Monetary Fund criteria for putting Greece’s debt on a sustainable path. And this time, the nation’s membership in the euro and the IMF’s credibility hang in the balance as Greece runs low on cash and European leaders look to the fund’s blessing before disbursing more bailout money.

The situation has Thomsen, whose thesis adviser was an architect of the euro, in the role of helping decide the currency’s fate. Thomsen has been closely involved with the Greek bailout since its inception in 2010, and often represents the fund at meetings of euro-area finance ministers, where officials from the European Commission and European Central Bank also typically attend. Those two institutions and the IMF form the so-called troika of Greek creditors.